Sigh. Someone had to do it.

‘The idea of ‘otherness’ is central to sociological analyses of how majority and minority identities are constructed’ (Dr Zuleyka Zevallos). Dr Zevallos’ analyses of this construction has frequently identified how minority groups are disempowered by the use of language. Dr Jordan Peterson, however, has constructed a notion of ‘otherness’ that affirms a normative set of behaviours and equates otherness with being a ‘loser‘ (Kate Mann). While Peterson’s argument is not based around racial, sexual or gender identities, it encourages a narrative that celebrates traditional values, even in the face of a specious justification for the foundations of these values. However, Dr Peterson has been called a heterodox academic (Laura Kennedy), since his rejection of the dominant belief in his discipline psychiatry  in ‘an almost wholly monistic modern psychological discipline, which takes brains and minds to be equivalent or essentially related entities’ (Kennedy, ibid.). This leaves Dr Peterson in the ironic position of being heterodox while advocating a traditionalist orthodoxy, that has been frequently associated with alt-right thinking and anti-feminist discourse. Peterson’s position is, however, far from unique: public figures such as Bill Maher pursue a similar course, celebrating certain traditionalist values and using apparently scientific arguments to support their claims, while posing as mavericks outside of the dominant paradigm.

Dr Peterson’s situation can be compared to the Silver Surfer, a character in Marvel comics. First introduced as a supporting character in the so-called Galactus Trilogy by Stan Lee and Jack Kirby (Fantastic Four #48, 1966) before being given his own series in 1969 (Lee and John Buscema). While his initial appearance has often been described as the result of a whim on the part of artist Jack Kirby – bored with drawing spectacular space vehicles, he decided to give Galactus’ herald a surf-board – Stan Lee used the character to explore a non-violent and more reflective mode of superhero, adopting many of the medium’s distinctive features as described by Richard Reynolds (1992) but presenting the Surfer as in search of peace and tranquility, only to disappointed by the hostility and fear of the human species. Despite immense power – conforming to Reynolds’ trope of the ‘man-god’ – the Surfer uses his powers for good, even being cited by Stan Lee in a radio interview as an example of a non-violent superhero while defending the genre against a colleague of the notorious Frederic Wertham.

Encased in silver and condemned to Earth, the Surfer is an alien marked out by both his skin colour and ambitions: despite defending the planet against his former master, he is rejected by the inhabitants and is accused of a failure to integrate. His lament for his homeland identify him as an unwilling migrant, the victim of cosmic upheavals. While the use of fantastic characters as an allegory for real-world minorities is deeply problematic – the familiar association of the X-Men with the civil rights struggle has been critiqued both for lending fandom a spurious connection with racial oppression and for introducing a form of ‘fantastic racism‘. Nevertheless, within Stan Lee’s broad progressive agenda, detailed in Antony Mills’ American Theology…, The Silver Surfer (1969) embodied the fashionable rejection of militarism and celebrated the value of the migrant presence. Subverting the alien appearance through human psychological realism and a clearly virtuous intention, the Surfer becomes an allegory for the positive values of otherness.

In this sense, otherness in Silver Surfer becomes a subversion of Peterson’s idea, or his philosophical position: the Surfer may be perceived as dangerous or a loser, but his values are approved by the author and justified. Peterson’s conventional dress – he rocks a suit – is a kind of anti-otherness uniform, determinedly expressing a kind of conservatism that speaks of his normativity. Bill Maher wears conventional togs, too.

Since both Peterson and the Surfer express philosophical arguments – in the case of the Surfer, ultimate worth is placed on conflict resolution while for Peterson it is something about lobsters – the question of orthodoxy and heterodoxy become relevant. While Peterson characterises his thought as heterodox, a blast against ‘political correctness’ and what he regards as a feminist orthodoxy, the Surfer experiences his behaviour as being treated as heterodox. Bill Maher gets a TV show: the Silver Surfer gets chased about by the cops. 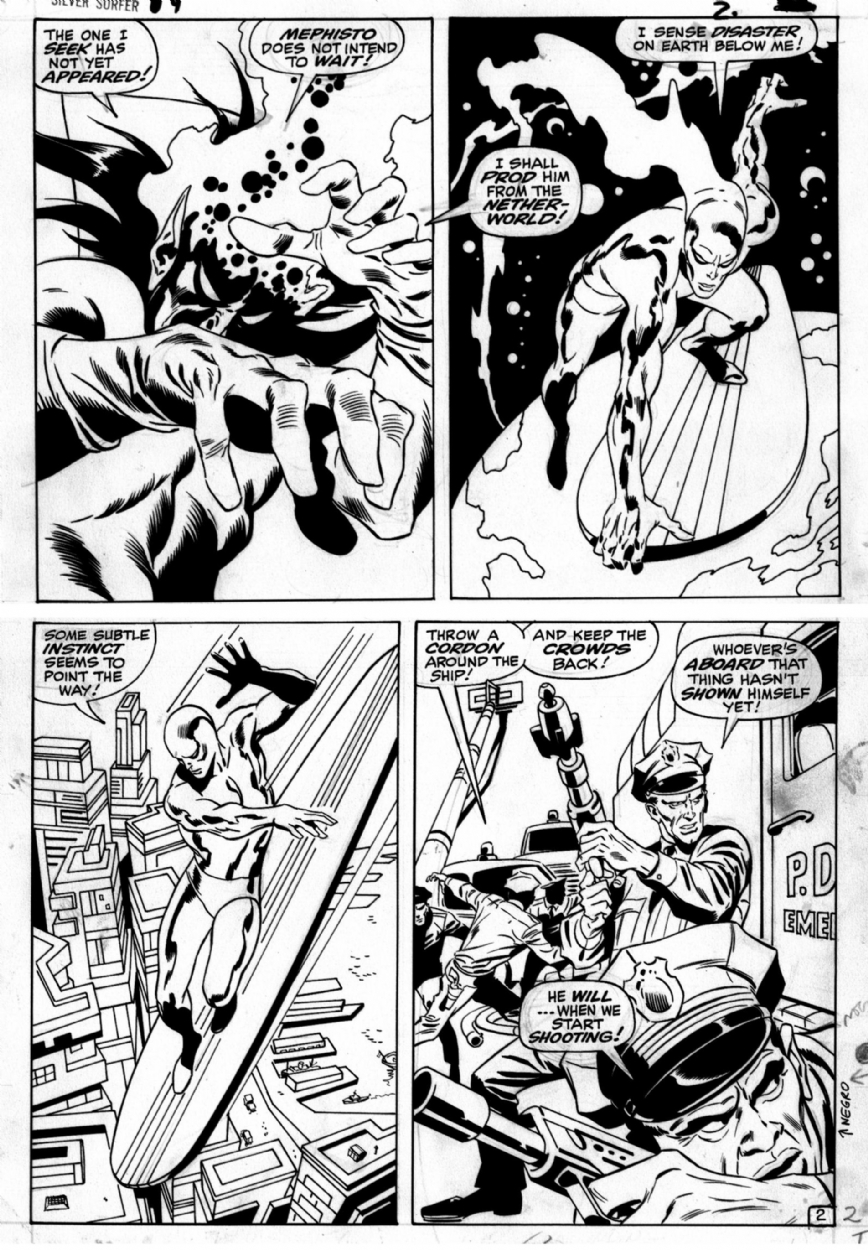 As an allegorical figure of otherness, The Silver Surfer explores how otherness and heterodoxy are treated by human society: rejected and attacked. Lee and Buscema suggest that the experience of being othered is not a function of the self but a social construction. This is in sharp contrast to Peterson’s distaste for otherness, or the treatment he receives as a supposed heterodox thinker.

Hey, Bill! Maybe if more people had read The Silver Surfer, they might have recognised the actions of ignorant groups and not voted for Trump. Perhaps it isn’t Stan Lee’s fault that he got elected, but that voters didn’t take superheroes seriously enough to consider what they are discussing.

Does this mean I can be a professor now?