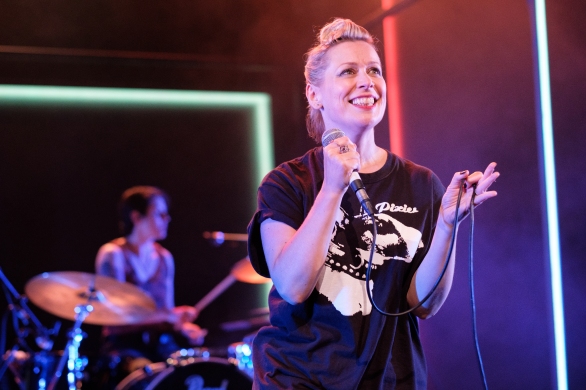 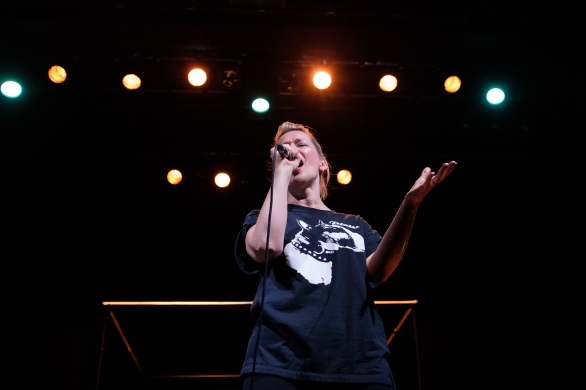 WHAT GIRLS ARE MADE OF

It’s 1992. In a small town in Fife, a girl is desperate to get out into the world. An ad in the local paper declares: Band Seeks Singer.

Grunge has gone global, indie kids are inheriting the earth, and a schoolgirl from Glenrothes is catapulted to a rock star lifestyle as the singer in a hot new indie band. Touring with Radiohead, partying with Blur, she was living the dream. Until she wasn’t.

Based on her meticulously detailed teenage diaries, this is the true story of Cora Bissett’s rollercoaster journey from the girl she was to the woman she wanted to be.

Fresh from an award-winning, sold-out run at the Edinburgh Fringe, performed with a live band, and directed by the Traverse Theatre’s former Artistic Director Orla O’Loughlin, Cora celebrates life’s euphoric highs and epic shitstorms, asking what wisdom we should pass on to the next generation – and which glorious mistakes we should let them make. 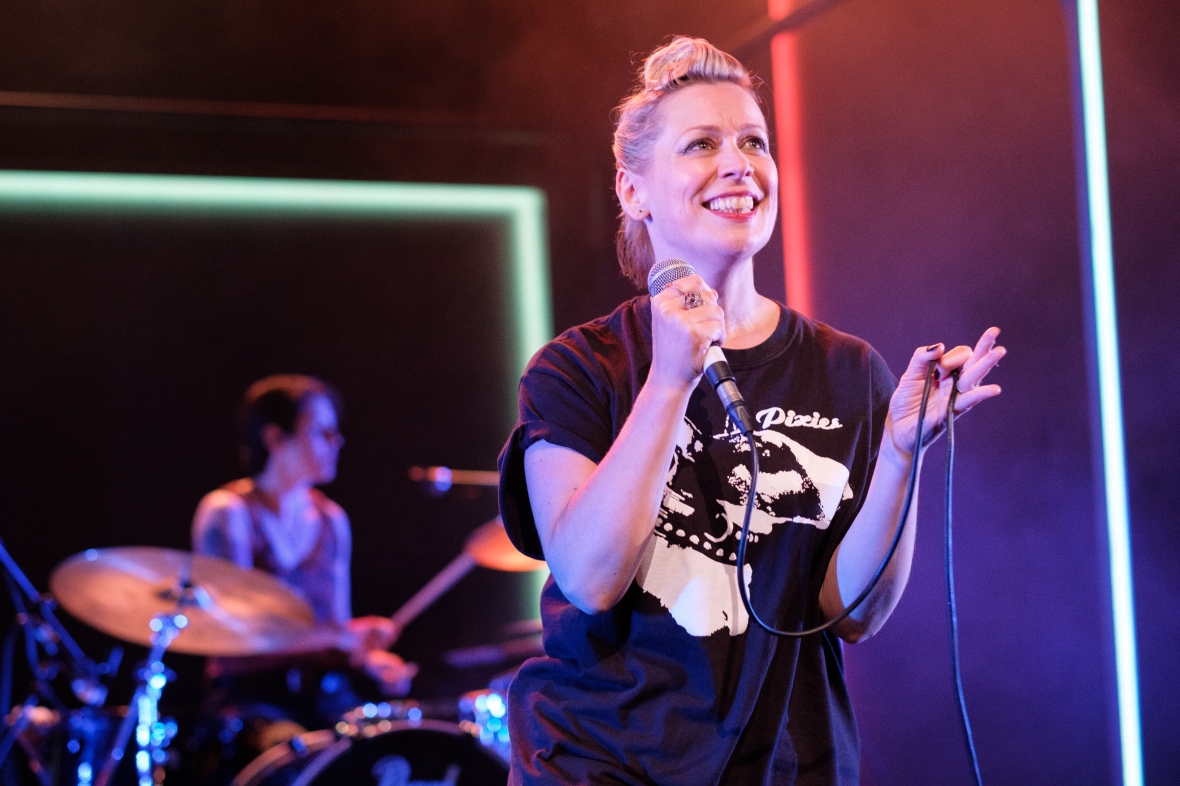 Is performance still a good space for the public discussion of ideas?

I believe so. It’s interesting that we are evolving to have so many more platforms to discuss things in ways that never existed before; all the social media platforms means we have daily chat and debate with a broad spread of people, discussions which may have taken place in the pub with a relatively close circle of mates or in more structured environments, and in some ways that is really incredible. However I think what performance still offers is a platform where something has taken time to evolve, to ‘stew’, to have a lot of consideration put into various sides of an idea or ‘issue’ before then sharing it publicly with a wider audience. I’m not actually that great on social media.

I just don’t think I form opinions on things at the speed at which social media works. I kinda have to go away and think about something, not have  a knee kerk, highly vocal reaction to whatever is happening. I think there is  a danger that we can lose nuance in arguments, and that we become ever polarised into our respective stances of ‘right’ and ‘wrong.’ Which is not to say it’s not an incredibly vital tool for informing each other and generating the spread of ideas…I just mean I’m not that great at it. I’m very glad other people are! I think because of the time it takes to go from an idea to inception, to writing it, to collaborating with other artists to realise it, to rehearse it, work through it with actors, thrash it out with many different inputs, I think what performance (when it is working well)  is open up an idea and bring all these layers to the table, and that is the gift to the audience, to present that by turns in a really engaging, conflicting, provocative, unsettling, new and/or accessible way. 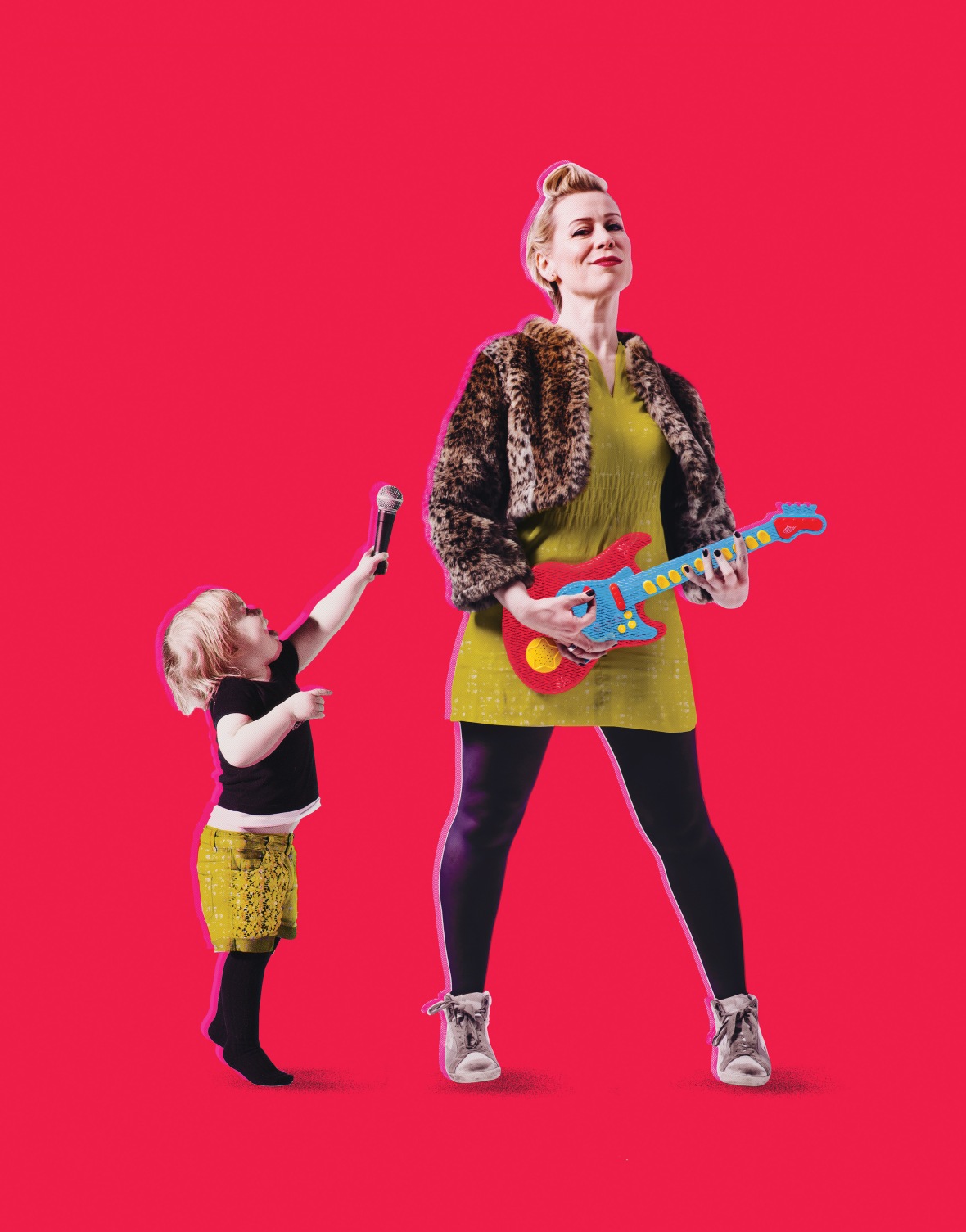 I can’t remember a time I haven’t been interested. I was making puppet shows in my room when I was 5, and concerts in the back garden putting flyers through the neighbours doors when I was 7. They were never starry eyed renditions of pop tunes…always slightly eccentric curatorial choices; a bit of devised something or other, some rehashed Charlie Chaplin routine, bit of modern dance and an interactive sing song..which was pretty radical for Glenrothes circa 1981. Everything else has just been an extension of that. Hopefully the shows have got  a wee bit better.

Is there any particular approach to the making of the show?

I adapt the working method each time for each production. It is entirely built around the subject matter, the concept around that subject matter, the space, and the creative artists at the heart of it. This show is the first show which I’ve sat down and written by myself as a writer so it’s  very different in that sense. It’s also autobiographical and so I spent alot of time pouring over the old diaries and revisiting the early 90’s. I reconnected with my old band mates, some of whom I hadn’t seen in 25 years. I wanted to be sure they were happy with me telling the story which they they shared.That in itself has been an incredibly cathartic, healing thing for all of us. Other than that, I just took myself off to a wee local pub when I got the little one down to sleep, ( her dad staying in with her) sat with the laptop and tried to write the truth. 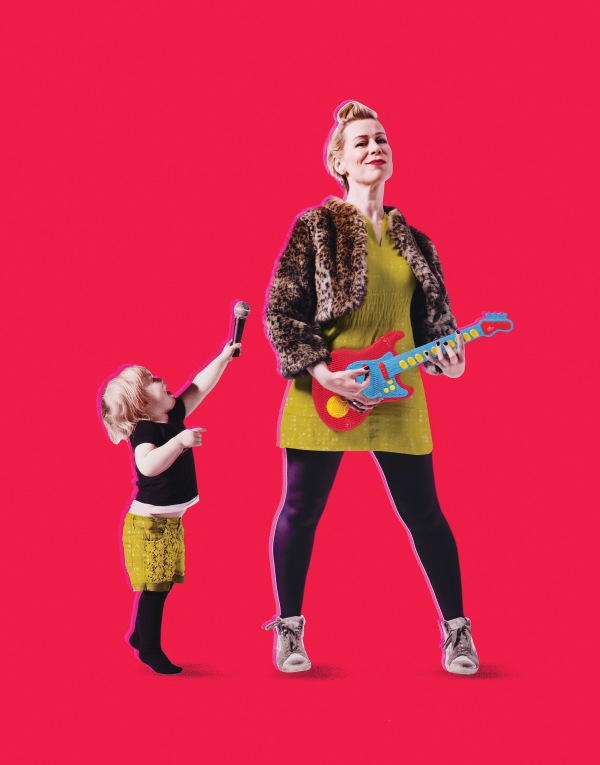 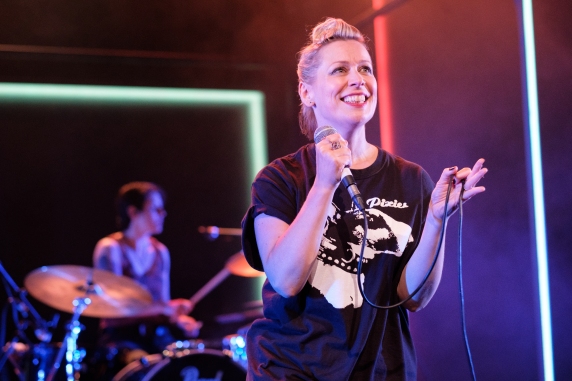 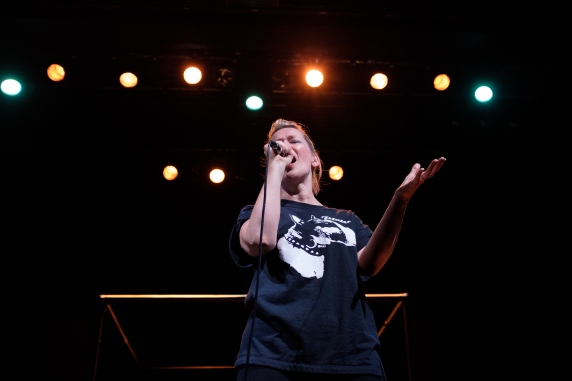 Does the show fit with your usual productions?

I don’t know if anyone likes to think of having a ‘usual’. From hard hitting site-specific pieces like RoadKill, to the proudly political and joyous Musical of Glasgow Girls, to multi-form ‘event’ theatre GRIT, to socio-political theatre tackling thorny common misperceptions like ‘Rites’ and ‘Adam’ , I’m not sure what my ‘usual’ is. If anything ties them together it is perhaps that I am drawn to stories which are often real and in which I can see  injustice at the heart of. I very often go through a fairly lengthy period of researching, getting to know the subjects at the heart of the story, build up a relationship with those ‘real’ people, search for the writer best fitted to the project. In this sense, WGAMO is very different, because for the first time, I was the person the story was about. Which took me by surprise.

When my dad died a few years back, I came across all my old teenage diaries charting this time in my life where I landed a record deal at the age of 17. I had written down every detail of events, and reading it over was like re-meeting my 17 year old self. I started to think maybe there was a show in it, but it was only when i started to think about the place where I am at now…as a woman in her 40s, a new mum with a deeply longed for little girl, that I saw a sort of structure, a reason to tell the story. It became about more than a ‘rock n roll adventure’ and it became about how those formative experiences as a teen shape you in a really profound way.

Getting picked up by a major label at 17 and sent out on the road for  a few years, had an unbelievable impact on me…just not in quite the way I expected. It became about how you find your way, turn things around, start to build the person you want to be. It became about not just those formative experiences but how we grow up at various points; you grow up when you leave home, then again when your heart is broken, then in a totally different way when you lose  a parent, and you become childlike and adult all at once, then you become a parent and you haven’t a clue who you are all over again. It was in thinking about what I could pass on to my daughter, what have I learned, what can I teach her that is of use, what wisdom have I collected if any, how do I help her be strong. That became the driving force of the piece and what I was searching for as I wrote it.

What do you hope that the audience will experience?

I hope it will be similar to the effect we had at the Festival last summer. People seemed to really love the rollercoaster ride; it starts off with a lot of humour, with a crazy indie rock adventure, the raw power of the songs. Those who love their early 90’s indie will feel a very special glow of love as we weave Nirvana, Blur, Sultans of Ping, Radiohead and Throwing Muses inspired tracks into the story.

But the journey goes far deeper, it’s about growing up, and growing up again, and finding your way through the ups and downs of trying to find out where you fit in the world and what you’ve got to offer. It is  a very honest journey through the loss of chances, the loss of  a parent to dementia, the longing for children, the loss of lives through miscarriages. I know the audience experienced very intense experiences of recognition and familiarity. I had women of all ages coming and telling me that was their story, men of all ages telling me they wanted their daughters to see this. People who had experienced loss of loved ones to dementia, and people who had experienced all sorts of hurdles to having family would come and hug me tightly. It’s a very honest, raw show, full of love and life.

It’s about learning what your ‘strong’ looks like and learning to love all the rough rides of your own journey which ultimately make you who you are. Ultimately it’s uplifting, it’s indie/grungey sweaty, unpretentious rock theatre, with a huge salute to Patti Smith and all the amazing women who have paved the way for us to be who we want to be.